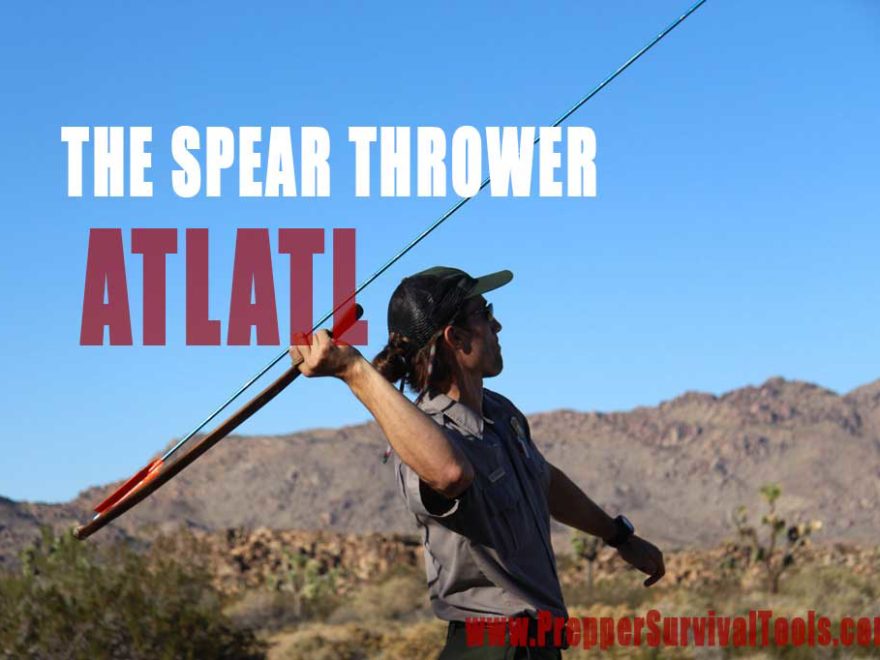 The spear thrower or atlatl is perhaps one of the most underestimated hunting weapons. Atlatl are an amazingly simple but effective. It is basically a stick, which you hold on one end, with a spear or very long dart (typically five to six feet long) nocked into a nook, hook or cup at the other end. By using the leverage, the atlatl multiplies the speed and force of the user’s arm. This allows the thrower to launch the spear or dart a greater distance and power than any human arm normally can. It’s a bit hard to explain with words, so we borrowed a picture from another website to explain it.

History and Culture Behind the Atlatl

Archeologists, and those with a dose of common sense, think that atlatls predated the prehistoric man’s bows and arrows. Given the much simpler construction of an atlatl compared to a bow and arrow, this is probably true. The oldest atlatls archeologists have found were discovered in caves in France from 21,000 to 17,000 years. It is likely that they were used long before this time.

The word ‘Atlatl’ is Nahuatl word, and currently there are strong cultural associations with native American culture. It should noted spear throwers have been used by native populations around the world, such as in the jungles of Papua New Guinea. In Australia, the aborigines use spear throwers which they called woomera.

Today, there is a US-based World Atlatl Association, founded in 1987, that serves as a meeting point for atlatl enthusiasts. This association has of recent been quite active in promoting atlatl through meet ups, sporting events and other activities.

Uses of an Atlatl

A strong throw can hurl a dart an extremely long distance. The spears or darts can be reasonable accurate with some practice. They have been used to hunt boar and deer. They are also used in sport fishing. Our Stone Age or Paleolithic Era ancestors used these atlatl darts to hunt megafauna, like bison, giant peccaries, mastodons, or even mammoths. The modern hunter will find atlatl suffient for hunting, with enough training.

In a self-defense situation, when encountering aggressive people, the atlatl will allow you to strike from a much farther distance, rather then the distance from a hand-thrown javelin or similar projectile.

Advantages and Disadvantages of the Atlatl

The biggest advantage of the atlatl is its simplicity. In the post-collapse world, simpler means less likely to need any maintenance or sustain any damage with will render it useless. A bow for example, needs lots of care, especially with the strings. Overtime, bows made from natural material may lose spring and the bowstrings may need changing. A crack in the bow itself will make it unusable or dangerous to use. On the other hand, you can probably leave an atlatl in a muddle puddle for a couple of days, and it would probably be as good as new after.

Compared to archery, however, the places to test your skill aren’t as many. There are a lot of archery enthusiasts and archery ranges, and atlatl users are still a much smaller minority. Recently, though, the Michigan Department of Conservation set up some classes, and there are morecompetitions for atlatl enthusiasts, so this might be an indicator of growing popularity.

One advantage though is that unlike archery or using a crossbow, no special training is needed to use and practice with a spear thrower as long as you are reasonably well-coordinated. Using an atlatl tends to be more instinctive.

The spears or darts used for atlatl tend to be much longer than those used for archery, and they may be harder to carry around compared to arrows or crossbow bolts, but this ensure that the darts carries enough power to bring down large game.

For preppers or survivalists, in situations when ammunition has run out, and appropriate materials for bows are scarce, they might find themselves relying on atlatl and their darts. They are much easier to make compared to bows, which need very smooth grained springy wood, and a tough cord for the bowstring.

Since spear throwers are relatively quite a simple tools, choosing the one right for you is a straight forward process. There aren’t many companies that make atlatls, but the company Thunderbird, which has been making them since the 1990’s is the most well known.

There are basic atlatls and there are atlatls with some obviously advantageous features. The basic and most popular one in the market in terms of gross sales is a no-frills design with three five foot darts, which costs at the time of writing US$84. The sample of this basic atlatl is pictured below. You can click on the picture to see clearer picture with the full details as it is currently on sale on the market today.

Since having a better grip and more prominent nook mechanism has obvious advantages, if you are willing to get a better one, it’s going to set you back US$158 (at time of writing). Take time to check out the better grip in the clearer pictures on the sales page which you can access if you click on this picture below.

Then, it just then becomes just a question on whether you want to get a better one for a higher price, or a basic one just to try it out before you invest in a good one.

There are other manufacturers out there, or of course, you could make one yourself…

Making Your Own Atlatl

It is definitely easy to make your own spear thrower from wood, steel (or even bone for the master craftsmen amongst you). The ancient Greeks and Romans even made spear throwers from leather thongs. The designs are simple enough that they can be copied without much technical expertise.

The darts also don’t have to be very complicated. Even without fancy fletching or designs a wooden dart will be able to fly accurately enough and have enough penetrating impact to bring down a large animal, or even a human foe in a self-defense scenario.

In an outdoor survival scenario, it is possible to make a spear thrower just from wood with sharpened sticks as darts. I have witnessed people make an atlatl and darts in a single afternoon from locally available wood without any specialized tools.

It may be amazing that this seemingly most simple of weapons may be one of the most effective for hunting or self-defense in a survival situation.